Fell in love with this yarn when I found it on sale at Ewe'll Love It [Ravel It!] ages ago. Of course I had to wait for it to speak to me about what it wanted to become. Either that or wait for a pattern to call out for the yarn! Whichever way it happened (how can I possibly remember we're talking over 2 years ago now!) the yarn and pattern came together for a great garment! 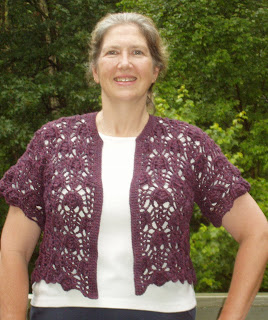 Project details:
Pattern: Short and Sweet [Ravel It!] by Angela Best [Ravel It!] published in Stitch 'n' Bitch Crochet: The Happy Hooker [Ravel It!]
Size: L
Yarn: Knit One Crochet Too 2nd Time Cotton [Ravel It!] in Borealis (love this colorway)
Hook: Brittany 5.0mm H hook, 5.5mm I hook for edging
Pattern Changes: added some overall length, being the amazon woman that I am!
Previous Posts: Last Progress Report and Initial "Startistis" Post
Posted by Ginny at 4:34 AM 12 comments:

FO: Into the Woods

Well at least it was called it "Into the Woods" when Robyn [Ravel her!] blogged about it back in August 2008!! Yes this is another almost 2 year old project for Robyn. My job was the sweater main body and pocket pieces. 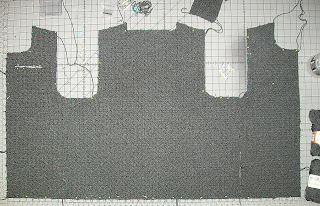 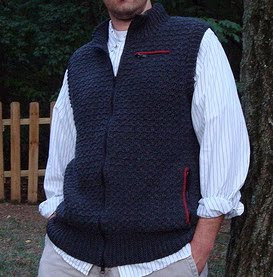 ll on my queue for my husband.... but not so sure I could finish off the 4 zippers as well as Robyn did. After her amazing finishing job, Robyn took this photo of the vest modeled by her husband.
Since it is now published, I can fill in the details a bit..
Project details:
Pattern: Rugged Winter Vest [Ravel It!] by Robyn Chahula [Ravel her!]
Source: Crochet Today Jan/Feb 2009 [Ravel It!]
Size: L
Yarn: Moda Dea 'Bamboo Wool' [Ravel It!] (now discontinued, but was a great soft wool)
Colorway: Dark Gray
Hook: Brittany 5.0mm (per usual for Robyn's patterns, I had to drop a size)
Posted by Ginny at 3:47 AM No comments: 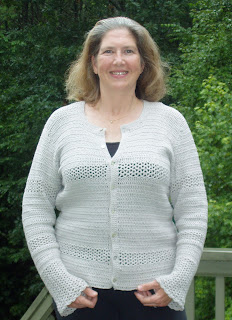 love this sweater!! If you've ever read this blog before you know I love Drops Design patterns [Ravel It!]. They are designed well, they use charts, the garments are flattering... you get the picture. I love the subtle designs they create with every day crochet stitches to achieve interesting crocheted fabric. This pattern used BLO dc and cross dc beautifully (IMHO). 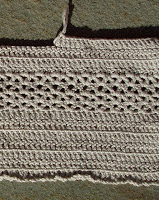 Project details:
Pattern: Drops 89-15 "Crocheted cardigan in muskat" [Ravel It!] by Drops Design [Ravel It!]
Size: L-XL
Style: I considered the collar to be optional. I chose to not add it.
Yarn: Reynolds 'Madrigal' [Ravel It!] (discontinued.. a JCA find for me)
Colorway: Speckled Natural
Hook: Addi Turbo 3.5 mm hook
Pattern Changes:
Posted by Ginny at 8:10 AM 3 comments: 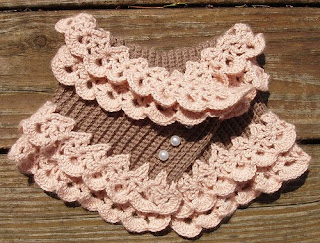 One benefit of delayed blogging is I can come out and tell you all about contract crochet projects because publication has already happened! I worked on this project for Robyn almost 2 years ago now and it was published in Interweave Crochet Fall 2008 as Austen Lace Muffler [Ravel It!] The yarn, Blue Sky Alpacas Royal [Ravel It!], was absolutely scrumptious to work with. I can only imagine how amazing it would feel against one's neck. Soft doesn't even begin to describe it.
Posted by Ginny at 7:37 AM 1 comment:

Simply put here's where i've been...

I've also been crocheting a little for myself, a bit more as a contract crocheter, but mostly overwhelmed by the above. I'm trying to dig out and mount a comeback onto the crochet scene!
Posted by Ginny at 10:06 AM 1 comment:

I'm about to start another secret project for Robyn and come to realize I never posted a link to her sneak peek for the last project! Well the beautiful Blue Sky Royal alpaca I posted about turned into this wonderfully soft and ruffly fall accessory that Robyn blogged about in a sneak preview back in May! Rumor has it, that the accessory was touched and felt and even worn by many staffers at the publishing establishment. I'll let you know when it's really out!
Posted by Ginny at 10:08 AM 7 comments:

I can't even begin to explain... suffice it to say that blogging time was usurped by the rest of life.

Did I mention I love being a pattern tester? Well you can add in contract crocheter as well. I have another secret project!! All the WIPs are on hold now as I have a special quick project to crochet for Robyn [Ravel It!]. I can show you the yarn this time. I wish you could touch it...it's amazingly soft and luxurious. And just look at that little Alpaca face..

[Ravel It!] links for Ravelry members only... Join now it's amazing!
All other links accessible by all.
Posted by Ginny at 6:02 PM 5 comments:

I just love being a pattern tester! Kim Guzman, aka crochetkim, was kind enough to ask a gang of us at Yahoo crochet-a-long to be her guinea pigs for her first laceweight pattern, Garden Party Wrap [Ravel It!]. Known to most of us as GPW now, this pattern is beautiful, and popular. She really hit it big with this one. It has been holding it's own as #1 new crochet pattern at Ravelry for almost a week now. I thought this would be a cool project to try out my ChainLink 2007 yarn purchase.. Just Our Yarn's "Aziza" [Ravel It!]. A zillion other things have been absorbing my time unfortunately so I have not made it very far on this project. Nonetheless, here's where I am so far...

[Ravel It!] links for Ravelry members only... Join now it's amazing!
All other links accessible by all.
Posted by Ginny at 5:30 PM No comments:

I just can't decide!!! I have to figure out what Purple Haze needs so it can become wearable. Can it handle buttons through the pattern as intended or does it need the structure of adding a button placket? Will a button

placket detract from the look of the sweater? Do I start with the somewhat ornate pewter buttons and see if the stitch pattern can hold these buttons? I have 5 of these so I could space them out as shown. I do think these buttons would work if I decided to add a placate, but would they be secure in the pattern holes? I guess I have to try this first.

If the oval buttons don't hold well and I decide the placate changes the look of the sweater too much then I might need a longer button that would stay in place better. I've been searching to no avail and am actually thinking of stealing the buttons off Twyla (these plain pewter, almost toggle-like buttons). In this photo, Twlya is stuffed inside Purple Haze so the button spacing was determined by where they are sewn on Twlya. I only have four of these buttons so I would have to space them out a bit more than shown. Twyla would then need new buttons! I guess I could see if Twyla's pattern stitch can handle the more ornate oval pewter buttons. I have plenty of the yarn left from Twyla so I could tighten up the button holes as needed. I found buttons to use to make 3 linked-button closures for Drops 97-1. I really like how the color of the pewter buttons matches the edging and how the heart shape blends with the V-stitch pattern. What do you think?
Posted by Ginny at 1:17 PM 5 comments:

Ginny
I'm a neuropharmacologist by training but currently loving life as a contract crocheter-tech editor-SAHM. I am blessed with 2 wonderful kids and a terrific husband. Crocheting not only keeps me sane, but also now pays for my yarn addiction.